How’s the Market? – More IT jobs in the region today than pre-COVID

Our clients rarely talk to us when their recruiting is easy or simple, so when we do hear, it is often a surprise that it isn’t easier to find better candidates while we’re still in the midst of a global pandemic. (We are, people. Mask up, please. This ain’t over yet.) What’s concerning to many clients is that they are often losing candidates at the offer stage, after all that time spent interviewing. One client saw three different candidates decline a job before they sought our help. (We did fill that one eventually, after bringing that total to four when the candidate accepted a job with a startup that literally had no management staff. I can’t make this up. No bosses. I guess I can see the appeal.) Although no good data sources exist for how many offers a candidate receives before accepting, we see from our recent efforts and commiserating with a couple of competitors, that multiple offers are the norm for nearly all high-tech talent. One of the greatest advantages we have working in Federal Health IT is that the mission to improve our nation’s healthcare system is one that is tremendously attractive for those looking for meaning from work, but working from a small supply of candidates constrains any search. Is there more demand than supply?

If you read my first “How’s The Market? – More IT jobs in Maryland today than 1 year ago”, you know this is a question I get often, usually as the most urgent fire we’re dousing winds down. Maybe they want to know if they should be more aggressive in their negotiations with new staff, or if they need to adjust their pricing to actually deliver, or perhaps they wonder if their internal recruiters are really putting in the work. (They are. They’re busting their butts, it’s just tough out there.) Or perhaps they’re looking to test the market for themselves when the time is right. Many clients are surprised to hear that there were actually more IT jobs last month in D.C., Maryland, and Virginia than there were in March 2020, just before the pandemic. Our national employment is down almost 4.5 percent from a year ago, even after the recent rebound, so how are there more IT jobs in DC, MD & VA?

A Look at the Numbers

We all witnessed the broader economy tank at the beginning of COVID and now see it rebounding. Computer Systems jobs are not immune to these difficult times entirely, but buoyed by Federal spending, the IT labor market has somehow gotten even more competitive. Over the last 13 years I’ve recruited mostly for local tech companies, recruiting and staffing primarily for Federal Government contractors serving agencies with health missions, and for nearly that long I’ve made some version of this graph. This version compares local Computer Systems jobs to employment totals nationally by indexing all the employment numbers to January 2017 for comparison. If you nerd out on graphs and data like I do, you can read through the analysis, but if you just want to know why and what you can do, scroll down to “Why is this region different?” and continue from there. 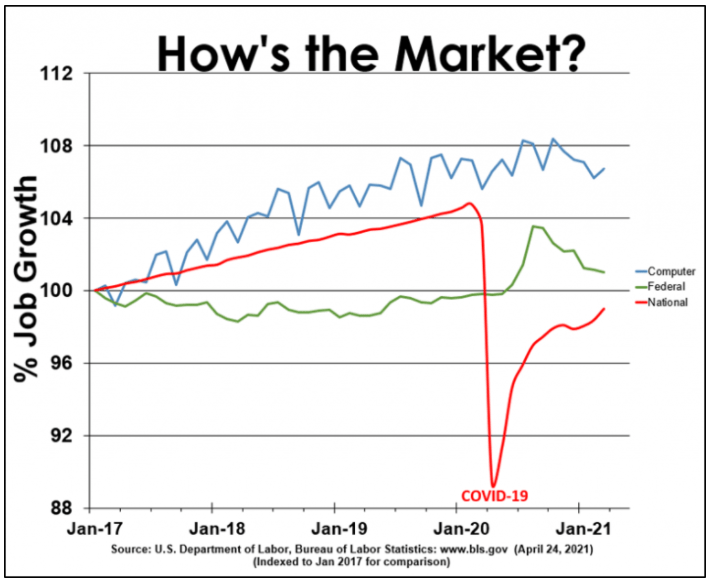 The US Bureau of Labor Statistics puts out a monthly jobs report we often hear about only in regards to the national unemployment rate, but the Bureau of Labor Statistics (BLS) database slices up the data in lots of ways, including by some NAICS codes, and includes specific data on the Computer Systems Design and Related Services category (which we’ll call “IT jobs” for brevity). This consists of occupations such as: Data Scientists, Software and Web Developers, Computer Programmers, Software Quality Assurance Analysts and Testers. (As a side note, our experience currently is that Data Engineers, Software Engineers, and DevOps talent with AWS skills are in the highest demand from our clients currently.) In March 2020, just before the effect of the pandemic really hit jobs, and in the midst of a very bullish economy, there were 247,300 IT jobs in the DMV and in March 2021 that number was up to 249,800. This is staggering since the pandemic briefly brought the national economy to near Great-Depression-level unemployment. For IT jobs across the entire U.S., the trend is not quite as positive, but there are still more IT jobs nationally than a year ago. This is a significant change from eight months ago when IT jobs were down two percent nationwide and it seemed certain that the trend amongst our clients of hiring staff to work remotely anywhere in the U.S. was also happening across the industry and driving demand outside the DMV.

Why is this Region Different?

What could be causing this steadiness in IT jobs locally during one of the most difficult economic periods in a lifetime? The primary driver is undoubtedly Federal spending. The Federal Government typically employs over two million people at any one time, and it has held around that figure for the last four decades. The region, as you well know, is home to most of the Government agencies in the US as  three of the top four states for Federal employment.

Private-sector jobs not funded by Government spending are not to be ignored as a factor for driving additional demand for technical talent. Startups nationwide took in a record $156.2 Billion in 2020, 9.5 percent more than in any previous calendar year, with the D.C., MD, & VA also beating its collective annual investment record in 2020. With all this tech money flowing to the area, it is easy to see why we haven’t had a recession in IT, and why the competition for talent is making it harder and harder for companies to compete. When the work is awarded to the lowest bidder, it gets even stickier.

What does it Mean for Federal Technology Contractors who Want to be Competitive?

The amount of Federal money being divvied out fosters fierce competition to get the price right and then to staff it at that price. It can be challenging to price a proposal when you are unsure about staffing the win. Performance on the program after a win are “good problems to have” we often say, but they are problems nonetheless if poor performance at program stand-up affects future opportunity. Unfortunately, when it’s time to staff up, software engineers and the like aren’t sitting at home waiting for a job offer. They’re already working. Software engineers have an unemployment rate less than half the national average, and only doctors beat out software engineers in terms of salary and job security. And software engineers know they are in high demand because recruiters hit them up daily on LinkedIn, GitHub, StackOverflow, and every other place they spend any time at all. (Are we recruiting on Discord yet?)

There are several issues common in the management of the recruiting function that can help address the challenge broadly.

All these suggestions can help improve Recruiting’s performance and make it clear how that performance is being measured, but they don’t address directly the issue of candidates taking other offers.

The best way to avoid losing candidates at the offer stage is to be the best choice they have and by far the greatest advantage in the Federal Health IT community is your missions to improve the Healthcare systems in our country. Great software engineers and their peers can work just about anywhere. They bring a skill that is in tremendously high demand and will continue to be. Many of the best of them recognize that building the next app to get you addicted to your phone isn’t always making the world a better place though and they want meaningful work. The pandemic has raised this desire even more across the U.S. as it caused folks to deeply ask what matters.

Is your mission meaningful? I bet it is. Is your mission front and center in your recruiting process? Maybe. Do your interviewers know the mission? Do they communicate the passion of building Civic Tech to make our nation stronger and our families healthier? Organizations who tell that story in each and every conversation attract not only great talent, but those who bring a passion to the work that will make them exceptional. My staff thrives on recruiting for just such positions and internal teams will imbue that upon candidates when they see leadership is truly passionate about communicating and living a mission that matters.